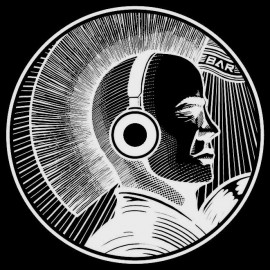 Having spent the last two years focusing on the release of our nine part Project Mohawk concept, we’ve been steadily working behind the scenes on what would follow. Now we are ready to lift the lid on what you can expect from us in the not too distant future.

First up for Autumn 2017 will be the opening release in our new Illuminati of the Deep series. As with its forerunners in Project Mohawk and Musical Currency, our aim is to continue offering high-quality music in new & innovative ways. Illuminati of the Deep will be our vehicle of choice to showcase a selection of more established artists whose music we love and who wanted to get involved with us. Each Illuminati release will feature two tracks as a limited edition hand numbered ‘pale glow’ 12″ vinyl, along with the usual digital download and streaming options. The pale glow vinyl was developed by adding certain chemical layers to the pressing process and this allows bright light to change the colour of the vinyl, in a similar fashion to what happens with glow in the dark toys, but far more subtle… Anyway, the results are truly unique, providing a translucent vinyl by day, and a whitish eerie glowing vinyl by night. We guarantee there will only be one pressing run for each EP, so as with our other limited edition projects, these will prove highly sought after and collectable.

Come and find out more about what we have in store for Illuminati of the Deep – Volume One.

First up will be Netherland’s based ZeroZero, who having dropped our most successful free download track to date with their ‘Rhythms of the Jungle‘, step up for a debut solo EP with us entitled ‘Syndrome’. Sam and Jesse are already making significant moves on the scene with releases on various labels, including Program and Cyberfunk, and are also a part of our much loved Cheeky Monday’s family, so we are truly delighted to welcome them on board. Also, watch out for a sneaky collab track with Teknian that will only go out as an exclusive bonus to those that snag the vinyl. Not one to be missed!

After ZeroZero’s efforts comes Bone. As those regular label followers will know, Marek is a regular contributor and has had tracks feature in all our Musical Currency releases, but ‘Killa Sound’ marks his debut EP release with Broken, and believe us when we say this represents some of his finest work to date. Test outings on the finished tracks have been doing some serious damage, you won’t want to miss this one…

Both the above releases will feature five tracks, four of which will form the digital release, with the two lead tracks making up a limited edition 10″ vinyl. Those that support the vinyl release will get a free download of the full digital release along with an exclusive bonus track.

Moving onto the album side of things and we have the much anticipated (but sadly delayed) 4th chapter of our Musical Currency series. Like its predecessors, this will be another various artists compilation only available on our uniquely designed USB credit card and limited to just 100 copies. Although we’ve had much of the music laid down for this release for a little while now, we’ve had to keep it under wraps whilst we overcome a few issues regarding the final tracklisting and production but happily, we are now closing in on getting this one finished and out there. The good news is that it’s shaping up to be the best Musical Currency yet with a fine selection of artists and music on board. All the previous credit card albums sold out within days, so don’t sleep on this one when it lands.

We then have a remixes compilation. Not saying too much about this one at the moment, except it will see a selection of favourites from our back catalogue getting the rework treatment from various label regulars & special guests alike. Expect a few surprises!

And finally (on this update anyway) we have the much anticipated solo album from Paramount. The boys have been working hard on this for well over a Year now, and we are delighted to report something of a masterpiece is taking shape! We’ll be telling you much more about this on our next update… So until then, it’s peace out from us!