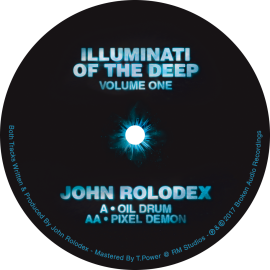 Illuminati of the Deep

Having recently completed our nine part Project Mohawk series, Broken Audio return with Illuminati of the Deep, a new release concept that once again raises the bar; both in terms of quality beats and the physical format they arrive on.

Illuminati of the Deep will be our vehicle of choice to showcase a selection of more established artists whose music we love and who wanted to get involved with us. Each Illuminati release will feature two tracks presented on a limited edition & stickered 12” pale glow fluorescent vinyl. A download card is also included with each EP purchase, providing free access to the full digital release once it goes live two weeks later.

The pale glow vinyl was developed by adding certain chemical layers to the pressing process. This allows bright light to change the colour of the vinyl, in a similar fashion to what happens with glow in the dark toys, but far more subtle… Anyway, the results are truly unique, providing a translucent vinyl by day, and a whitish eerie glowing vinyl by night. We guarantee there will only be one pressing run for each EP, so as with our other limited edition projects, these will prove highly sought after and collectable.

For Volume One we present the music of John Rolodex. A time served pioneer of the Canadian D&B scene, he’s not a new name to drum & bass headz with his music having already featured on a slew of quality labels, such as Metalheadz, Hospital, V Recordings, Dread, Tech Itch and his own excellent Machinist Music imprint to name but a few. A producer that’s not afraid to cut his own path rather than following the conventions of others, he steps up for his debut release on Broken Audio with two tracks aimed squarely at the dance floor.

Leading off we have ‘Oil Drum’. Like an 808 driven monster rising from the depths, Rolodex serves up one of those left of centre tunes you’ll often hear around 3am in a club that leaves you thinking ‘what the f*ck’..!? Honed with a background of near techno militancy and industrialism, it’s a stand out track for those seeking a fresh angle to move a crowd.

Hot on the flip comes ‘Pixel Demon’. Almost a tribute to a bygone skill, Rolodex serves up his take on the classic bassline roller; sub laden, crisp breaks, full of energy, but all delivered with that trademark grit that marks it out as a track by an innovator rather than an imitator.

With extensive and diverse pre release support from across the scene, including the likes of DJ Krust and Sinistarr hailing this as one of Rolodex’s finest EP’s to date; it’s more than a fitting start to our latest musical journey.