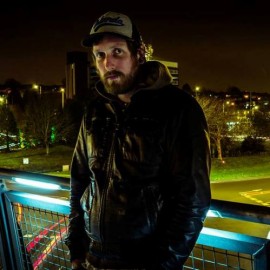 Re Turn aka Paul Turner is emerging in the scene with his love of dirty chopped breaks and deep deep bass!  With flavours from all kinds of music finding their way into his tracks, much like his DJ sets, you just don’t quite know what is round the corner of the next breakdown. His personal influences go from Aphex Twin to Zed Bias and he is a huge Jazz and Hip Hop fan, which all find their way to the surface of his most of his tunes…

It all started in Hertfordshire around the 90s when a young Re Turn was intrigued by all electronic music. Fascinated, obsessed by Rave and DJ culture, which at the time was well out of reach because of his age. All he could do was absorb as much as he could by tape packs and pirate radio and it was in the late 90s he truly fell in love with dnb and jungle… It wasn’t long before he was attending as many events in London as his wallet would let him, regularly  spending his nights at The End, Camden Palace, Fabric or Herbal to name a few. Soaking up all of what the seminal nights would offer and it was at these nights that he developed the need to DJ himself…

After a few years collecting vast amounts of Drum & Bass records and playing various local gigs, including a few slots on Manic FM, he was introduced to production from a producer friend who showed him the basics…..and then the seed was planted. Still djing He began concentrating on his production and developing his ideas and sounds, however several years ago he left the UK, record box in hand and moved to the sunny shores of Australia and straight away cemented himself in the Melbourne DnB scene.

Alongside locking himself away in the studio he has spent the last few years playing regular sets at various Nights including guest spots on Australia’s KISS FM, he also helped promote some of Melbourne’s biggest dnb and dubstep nights!

But now, Re Turn has ‘Re Turned’ back to home soil and is eager to unleash what he has to offer and sets to get his music heard!…..

1. What is the high point of your musical career to date?
Being signed by you guys….

3. Name a track by another producer you wish you had made?
Fanu – Tears of the killer