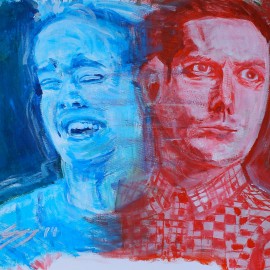 Bipolar are Max Alexander & Brendan Mills from London UK. 2014 saw the duo emerge onto the scene with a string of digital hits and their first release on Vinyl. Most notably they made a major contribution towards one of the most eagerly awaited albums of the year on Metalheadz with their track “interlude” which featured on Platinum breaks 4.

Brendan is a classically trained Saxophonist musician, Max a DJ / Producer buried deep in the scene with an ear for arrangements and ever growing technical knowledge. It was their fusion of styles that was always going to deliver the goods and break new ground.

With a 4 track E.P and a compilation track set to drop on Broken Audio during 2014, Bipolar’s reputation for taking drum & bass beyond the obvious sample driven mainstream is set to grow as they hone their own unique style and production sound.

1. What is the high point of your musical career to date?
Being released on Metalheadz on the legendary Platinum breaks series and bringing some live instruments back to the jazzy side of the scene!

2. Favourite VST Plugin?
PSP vintage warmer hands down.  If we had he money we would love some real outboard gear but we seem to manage on just software driven plugs and a few expensive mic’s at the moment.

3. Favourite Club Night?
Used to be SWERVE @ The End in London, but recently we have become frequenters of SOUL IN MOTION in its plush hotel basement club. A real mixture of styles and importantly a meeting place for industry people to listen to great music in a relaxed environment!

4. Greatest influence on your music?
We both have very different influences.

Brendan - I'm strongly influenced by the Jazz background I took to whilst training to become a saxophonist. I became heavily influenced by MJ Cole through my love of dance music and wanted to take that sound to a new level with my sax arrangements featuring heavily in our more musical tracks. Yes I do play everything myself, no samples used in any of our tracks !